TumbleSeed is a Nintendo Switch title that I want to avoid using popular genre names to define. While it does share characteristics with roguelikes, in that you have to overcome randomly generated obstacles and death means a quick trip to start screen, I feel that lumping it in that category does its originality a disservice.

In TumbleSeed, you play a as a sentient seed that your fellow spoutlings call “TS.” Your kind lives happily on a mountain, but things are not well. Strange subterranean creatures have begun popping holes all over your homeland, making life perilous for your kind. And things will only get worst unless TS can reach the mountain’s summit and firmly plant himself there, purging their home of unnatural threats.

But that’s easier said than done… and I mean waaaaaaaayyyy easier!

To accomplish his task, TS must ascend the mountain, rolling deftly around pitfalls, dodging predators and gathering power-ups to make his climb easier. But the control scheme of TumbleSeed turns all of these run-of-the-mill tasks into something intricate and thoroughly challenging.

You see, TS can’t actually move on his own. He’s just a seed with no real means of propelling himself in any direction. However, TS happens to sit atop a platform that extends from one side of the screen to the other, and the player can raise or lower the edges of this platform using the left and right analogue sticks. So, if you want TS to roll to the left, you just have to raise the right side of the platform and he’ll go rolling off. Raise or lower both sides together and the platform will act as an elevator, lifting TS up or ducking him below incoming threats. But you must be mindful of the momentum TS gains as he rolls. Set him rolling in one direction too quickly, and you might not be able to stop him before he goes barreling down the gullet of a hungry snake!

Our intrepid seed does have a few powers, however, to help tame the wilderness. Along the way, you will encounter many seed beds where TS can plant a variety of handy

flowers. To start, you will always have access to four types of plants: Thornvine, which generates a spike that floats around TS to poke at enemies; Flagseed, which sets up a kind of safety net to catch TS when he falls down a hole (saving you from re-climbing the entire stage); Heartseed, which can replenish your health; and Crystal which generates the currency used by every other plant type. Crystal can also can be exchanged for items and power-ups in the towns you’ll visit along the way.

There are dozens of other seed types to be obtained, though they all require a bit more care when using as they either cost several Crystals and/or they can potentially hurt you if used blindly. The variety is enjoyable, and whatever combination you end up with drastically changes your ability to confront (or escape) certain threats. It forces you to adapt your play style each run and I enjoy that immensely.

Additionally, you can also pick up Auras at certain points which give you a constant ability. Some of these are pure win, like the Magnet Aura that draws in all nearby Crystals. But then there are double-edged swords, like the Ghost Aura that summons a ghost to slowly follow you (even in towns) which damages anything it touches (even you). The mixed-blessing behind these Auras caused me to just pass on them more than occasionally, which feels like a handicap in an already crazy tough game.

Speaking of skipping features, there are a lot of optional mini-games and challenges tucked into the stages and towns… that I will almost never engage with. That’s because these challenges – which should be fun breaks from the brutal difficulty – always cost valuable Crystals or can hurt you. Only when desperate am I willing to risk these.

On the plus side, you can also skip lots of things you want to bypass, such as whole areas of the mountain! 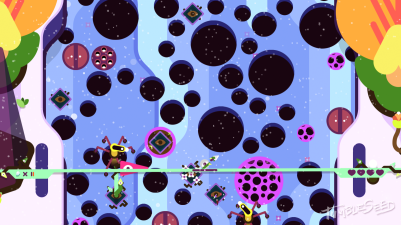 You do this by completing a variety of missions given to you by the mayor, such as “buy an item from a shop,” or “reach the next village without taking damage.” Eventually he will ask you to carry an Aura to the next town up the mountain. Succeed, and you’ll unlock the ability to teleport to that village anytime you start. So even though these areas get ridiculous tough, you don’t have to grind your way up to them for one more shot. It’s the one glimmer of hope for anyone to beat this game given enough dedication.

In addition to simply trying to summit the mountain and win the Adventure mode, there are other features that make loading up TumbleSeed tempting when you have a few minutes to kill. There’s a Daily Challenge that gives you one shot at attempting that day’s random set of obstacles, and you can compare your progress with other players on the leaderboards. You can also see how far you’ve progressed up the mountain compared to friends or the world’s best, which is always a strong motivator for me in this type of title.

The art and sound of the game are both soothing and enjoyable. I like the design of the 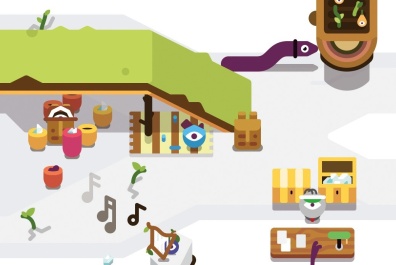 villages filled with colorful seed people, as well as the natural feel of the wilderness between towns, which takes on drastic differences as you progress. I also appreciate how different each of TS’s forms look when you swap between seed types. These make it very clear what kind of weapon or status effect that particular seed will release once planted. The enemy designs are also very cool, as they all feel quite natural yet terrifying at the same time. The music is tribal in nature, and helps get you into that focused sense of zen required to get anywhere in the game.

But if there’s one thing that de-motivates me from playing Tumbleseed, it’s the pure level of frustration it can evoke. The difficulty is never casual, and it spikes substantially between mountain zones. Even an amazing run where everything seems to be going perfectly can spiral into disaster in just moments.

At its core, TumbleSeed is a game of balance. First you must balance risk and reward: Should I go out of my way to plant a Flagseed by the hungry Spider? Or should I just advance and hope I don’t fall down a pit along the way? It’s also a game of balancing patient, careful maneuvers, with the need to react quickly to pressing threats. And finally, it’s literally a game of balancing TS with controls that may feel disempowering to some. But I think they actually open up exciting new possibilities for level design and how you can tackle challenges. Though, this leaves me wondering if this game would actually have been better served by levels that were actually designed to take advantage of this control scheme, rather than only having them randomly generated.

KC’s TAKE: TumbleSeed requires deep skill, careful planning, and saintly patience. It’s the kind of game I enjoy in 10 to 30-minute bursts… but I find difficult to recommend to others. I think it will be appreciated by gamers who take pride in things other than lightning reflexes, memorization and button-mashing skills. Despite how the game angers me at times, I never find it unfair. And I still turn it on daily just to see if I can complete a few more missions and reach a few feet higher than before.

JV’s TAKE: TumbleSeed has a striking and appealing art style that compliments its unique control scheme, which is the game’s primary selling factor. While the controls are precise, the level of meticulousness and patience required to make simple movements can be frustrating to certain gamers. This game’s experience can be either zen-inducing or maddening, depending on the type of games you enjoy. Though I can’t say this is my cup of tea, I can acknowledge that it’s a well-built game for people who love its take on “endless climbing” and roguelikes.